She is almost the exact opposite to her sister for two reasons. One is that unlike her sister, mother, and her brother when crossodressing; her chest is not very developed, with only an A-cup through the series to compare to her sister's original F-cups which continue to get bigger throughout. Something she is very jealous of. 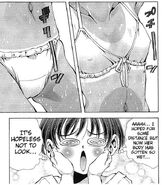 Add a photo to this gallery
Retrieved from "https://eiken.fandom.com/wiki/Yuriko_Shinonome?oldid=5690"
Community content is available under CC-BY-SA unless otherwise noted.