Together they are the co-presidents of the female wrestling club.

Rai (雷) is the ditzy and kind one of the sisters as well as the eldest, Rai prefers using holds and grapples to weaken her opponent. She wears white.

Den (電) is the more serious of the sisters and wears black. Den prefers power moves such as slams and suplexes to cripple her opponent.

Both sisters believe that Chiharu Shinonome and Densuke Mifune can teach them much about wrestling after they defeated them in the ring. They also appear to have a slightly different interest in Densuke and will try to outdo each other when trying to get his attention.

Though they are twin sisters they are actually only 2 of quadruplets. Their older twin brothers are Gai and Riki, who are the heads of the athletic federation, are much bigger than them, but are still easily defeated by their sisters. 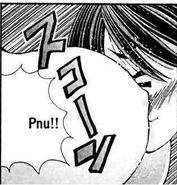 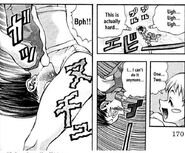 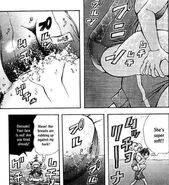 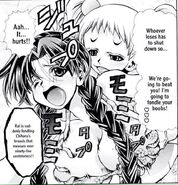 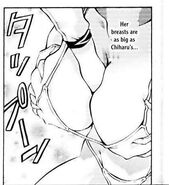 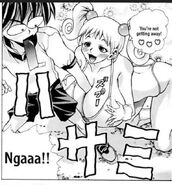 Add a photo to this gallery
Retrieved from "https://eiken.fandom.com/wiki/Raijin_Sisters?oldid=6830"
Community content is available under CC-BY-SA unless otherwise noted.