Leon (レオン) is Lin Grace's knife wielding bodyguard. He often appears out of nowhere pressing a knife to Densuke's throat.

He was introduced in Volume 1, holding a knife to Densuke's neck thinking he was trying to pull a weapon on Grace, when he was just asking about Chiharu's missing wallet.

He only appears in the Manga. 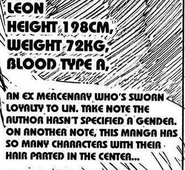 File
Community content is available under CC-BY-SA unless otherwise noted.