Kirika Misono (御園 霧香, Misono Kirika) is a student at Zashono Academy and the unofficial leader of the Eiken club. She is actually in love with Densuke Mifune but accepts his affection towards Chiharu Shinonome. Nobody knows much about her but knows that she uses Densuke Mifune.

Kirika is a woman with purple hair, black eyes, and huge breasts. She wears the Zashono Academy uniform, which has the green sweater and yellow vest, only differences being is that she sports a purple ribbon instead of a red one. She also wears gray/grey and red sneakers. She doesn't wear underwear.

She is the one that forced Densuke Mifune to join the Eiken club because, according to her, he had no skill and lacks noticeability, and has tormented him often since; she has often used her breasts to tease him through either smothering, using his head to hold them up, hitting him with them or just deliberately giving him a peek. She has also been known to use her butt to hit Densuke with great force as well. 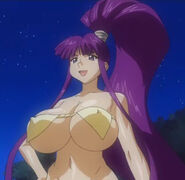 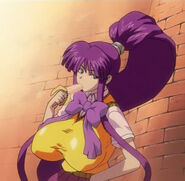 Wikia-Visualization-Main,eiken.png
Add a photo to this gallery
Retrieved from "https://eiken.fandom.com/wiki/Kirika_Misono?oldid=6011"
Community content is available under CC-BY-SA unless otherwise noted.