Back to page
Edit

Keiko Shinonome (東雲京子) is the single mother of the Shinonome children except she is the aunt of Miharu Shinonome.

Keiko is a single mother; although later she admits to Densuke Mifune that she has feelings for him despite being significantly older than him. She intially attempts to seduce Densuke, but stops after realizing that her daughter is truly in love with him.

Keiko has a very kind and motherly attitude but can be ditzy and absent minded. She is easily distracted by whatever catches her eye. During her first meeting with Densuke she had lost her wallet but was repeatedly distracted by other things.

Unlike Chiharu Shinonome, Keiko is not embarrassed in the least by her body and has considerably less modesty, but not to the degree of Kirika Misono or Yuriko Shinonome. During her first encounter with Densuke she did not even blush when he accidentally groped her, and unintentionally put him in several positions (i.e hugging him from behind while wearing a towel bikini, hitting the back of his head with her breasts, etc).

During the mid 1980's she was a TV idol working under the name "Hoshino Jun". However she eventually quit as there was not a high demand for big breasted women. She eventually settled down with a husband and had 6 children.

Her first encounter with Densuke mirrored her daughter as he accidently collided with her and accidently felt her up. Unlike Chiharu's encounter Keiko understood it was an accident and introduced herself. They went looking for her missing wallet and Densuke found out she was Chiharu's and Yuriko's mother (as well as the idol from the picture he had been ogling). 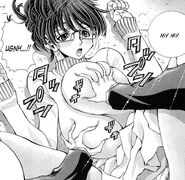