Densuke Mifune is a shy 15 year old boy. Before he joined the Eiken club, he was shy and did not have many friends except for Shimada and Todoroki.

While attemepting to gain Chiharu's affection, Densuke is always getting into situations that end up with him in a compromising position with one or more of the girls. Either by accidents or through deliberate acts done by the girls who are either teasing him (Kirika) or who genuinely want his affection. 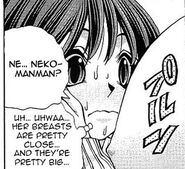