Chiharu is a 15 year old student who, at the start of the series, has just started attending Zashono Academy.

Chiharu is a big breasted innocent girl who has a slightly romantic relationship with Densuke. They both like each other but are embarrassed to show it.

Her breasts grow rapidly through the manga and the anime from the original 88cm to over 100cm, it was said by her mother Keiko Shinonome that her own breasts were the same size as Chiharu's when she was that age so its possible Chiharu will stop growing around her mother's size of 123cm.

She is the eldest of six siblings; unlike most of the other members of her family she is much more conserved. She is embarressed when men and especially Densuke look at her breasts and tends to cover them with an arm and shy away which tends to make her admirers find her more appealing

She doesn't like them being groped. Her breasts are very sensitive and she is all but paralyzed when they are touched. However she has said before that when Densuke did it when they first met that she wishes it hadn't been in front of so many people. 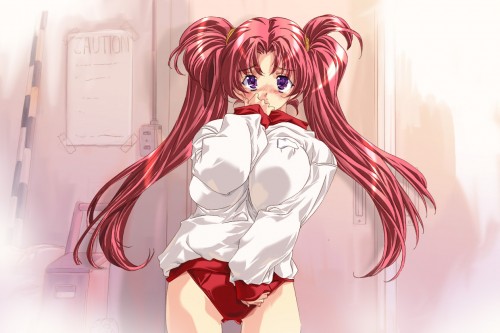 Retrieved from "https://eiken.fandom.com/wiki/Chiharu_Shinonome?oldid=3618"
Community content is available under CC-BY-SA unless otherwise noted.